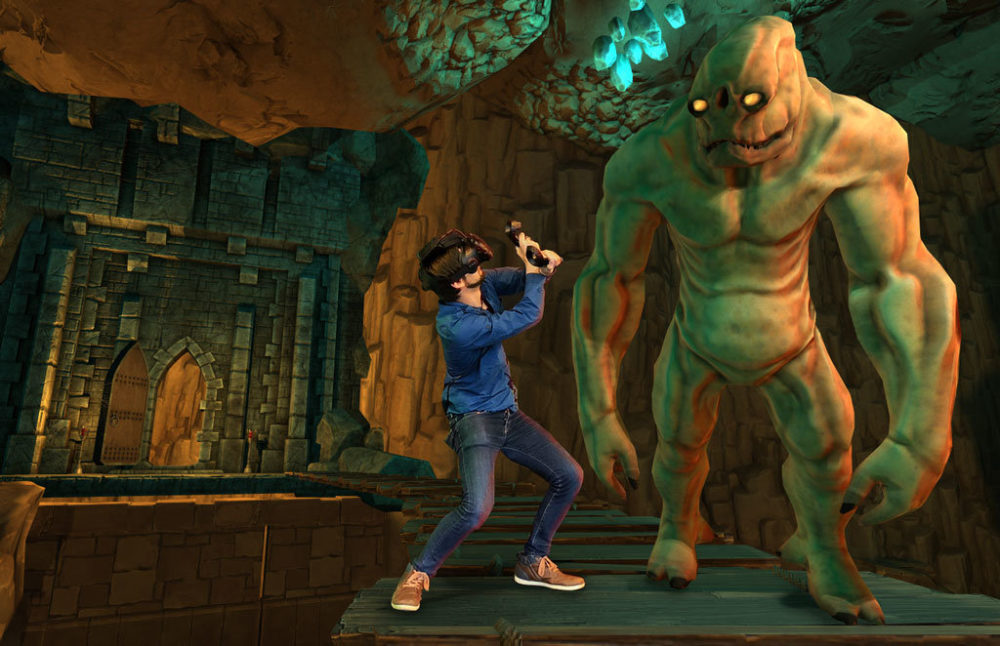 We spend a lot of time at the office talking about VR, and sometimes, luckily, enjoying it as well as we challenge each other to beat the highscores on Space Pirate Trainer, or when we dabble into building Vive VR prototypes ourselves.
There are a lot of opinion about VR. People say it will be big, people say it will be huge, people say it is the future. Just take a look at Steven Spielberg’s ‘Oasis’. Yet others claim VR is already dead. I’ve even heard someone say that using VR was already considered ‘Oldskool’. Now I acknowledge that time flies fast! But I don’t think VR is something from the past just yet.
Actually, I don’t think it’s just a thing for the future either. As a gamer, and a developer, I think the time for VR is now. So let’s talk about that!

99 Problems
It can’t be said that all parts of the VR industry are currently booming out of control. For business to business applications and training simulations things are progressing. Businesses are finding their way to VR. But for the gamers, yes, there are problems.
Gamers are hesitant to buy expensive VR devices because there is no abundance of quality games they’d see themselves playing. On the other side the developers are hesitant to develop for VR because there are no abundance of players waiting to buy and enjoy their game.
In the meanwhile both the developers and the gamers have a hard time figuring out which of the many platforms to invest in, and from there it’s a bit of a downward spiral.

Platforms
There are a lot of different devices exploring the new field of virtual reality and there is a lot experimentation going on. With new platforms come new ways to interact with the games. Most PC game had its trusty mouse and keyboard combination, but for VR there is no such standard yet.
So HTC Vive, Oculus Rift and Playstation VR are each trying to set the standard and introduce new and different ways of enjoying virtual realities, with their own setups and their own controllers.
These three all provide the basis for great VR experiences. For anyone doubting whether the technology is ready, seek out a friend that has it, and try the HTC Vive, with its ability to go wireless and the great tracking of its controllers. Spin up the free ‘The Lab’ game, which showcases al lot of what the device has to offer. Pet a virtual dog that you will instantly fall in love with, or shoot arrows with a virtual bow and marvel at how you are able to hit the flying balloons.
My friends, believe me, the technology is there.

But where is the content?
VR today, could be seen as a big empty pool of unrealized potential, with lots of people looking at it from a short distance, afraid to be the first to dip their toes in.
Mostly Indie studios, but luckily also some of the big boys are willing to dive in and take the risk. Besides seeing beautiful and bold games like Eagle Flight, in which you fly through Paris as a giant eagle, you can now also play well known IP’s such as Fallout 4, Doom, Skyrim. And although we will always encourage you to pay attention to the smaller independent developers, it’s good for the VR brand to see some big IP’s titles strap on their bathing suits and join the pool, so to speak.

Uncharted territory
Designing content for VR isn’t easy. Virtual Reality is largely unknown and unexplored, and it challenges you to come up with creative solutions to simple looking problems.
When designing PC Shooter, a lot of game design is handed down to you through design patterns built up from older generation games that went before. You aim with the mouse, you walk with your keyboard WASD or arrow keys, pressing the ‘ESC’ button summons up a menu and so forth. For VR there are no such staples yet that dictate, or help you know how to move, control or interact with what you see.
An example: a room-scale setup (like with the HTC Vive or the Oculus Rift) offer you a space that you can physically walk between, tracking you so you move within the game as well, which feels awesome and immersive. But the immersion stops when you try to climb a virtual staircase; because you will forget there actually isn’t a staircase, and it won’t end well. But then the industry starts thinking and now we’ve got solutions like teleporting from location to location, games that take place solely on a moving platforms, or stationary scenes so that you will never have to climb stairs.
Obviously these are problems that normal games don’t face, but they are far from being insurmountable (forgive the pun). We are finding more and more solutions and tricks to further enhance the immersion of the experience and we are getting better and better at this every day.
There are some great titles that have launched, and more that have been announced. But we need more great games for VR, and we need more gamers.
So to all of you doubters we say; boldly go where others have gone before you, take a leap with VR and come into the water. Be it as a gamer, business or developer. Because we’ve already experienced some amazing things, and it will just get better.

Thank you for reading!