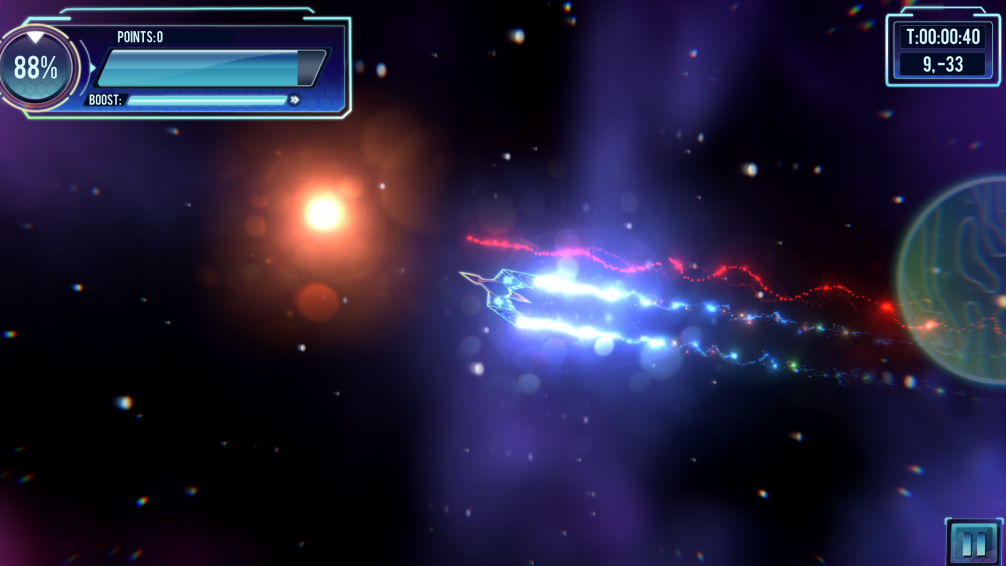 Hi there, Lucila and Pip here! We had the opportunity the create a game of our own design here at Alterego Games. After a few discussion about what we should create, we decided on a top down space shooter. Sounds boring, unoriginal? We attempted to remedy that.

The main challenge for me, Lucila – the artist, was creating art suitable for a space game.
Before starting this project I knew nothing about space-related things, but thanks to a lot of research, I do now! The guys on the team all pitched with space-trivia easter eggs.
The enemy and player designs were a real struggle at first. I was instructed to differentiate the enemies from the player and the enemies. It started out as a trial and error kind of thing but with the help of some colorschemes it worked out quite nicely in the end! (if I say so myself).
Another aspect of the game where I put a lot of time and effort into was the User Interface. I tried to make it unique in it’s own way. Looking back at the collection of artwork that was made for the User Interface, I can really see the improvement with each draft. 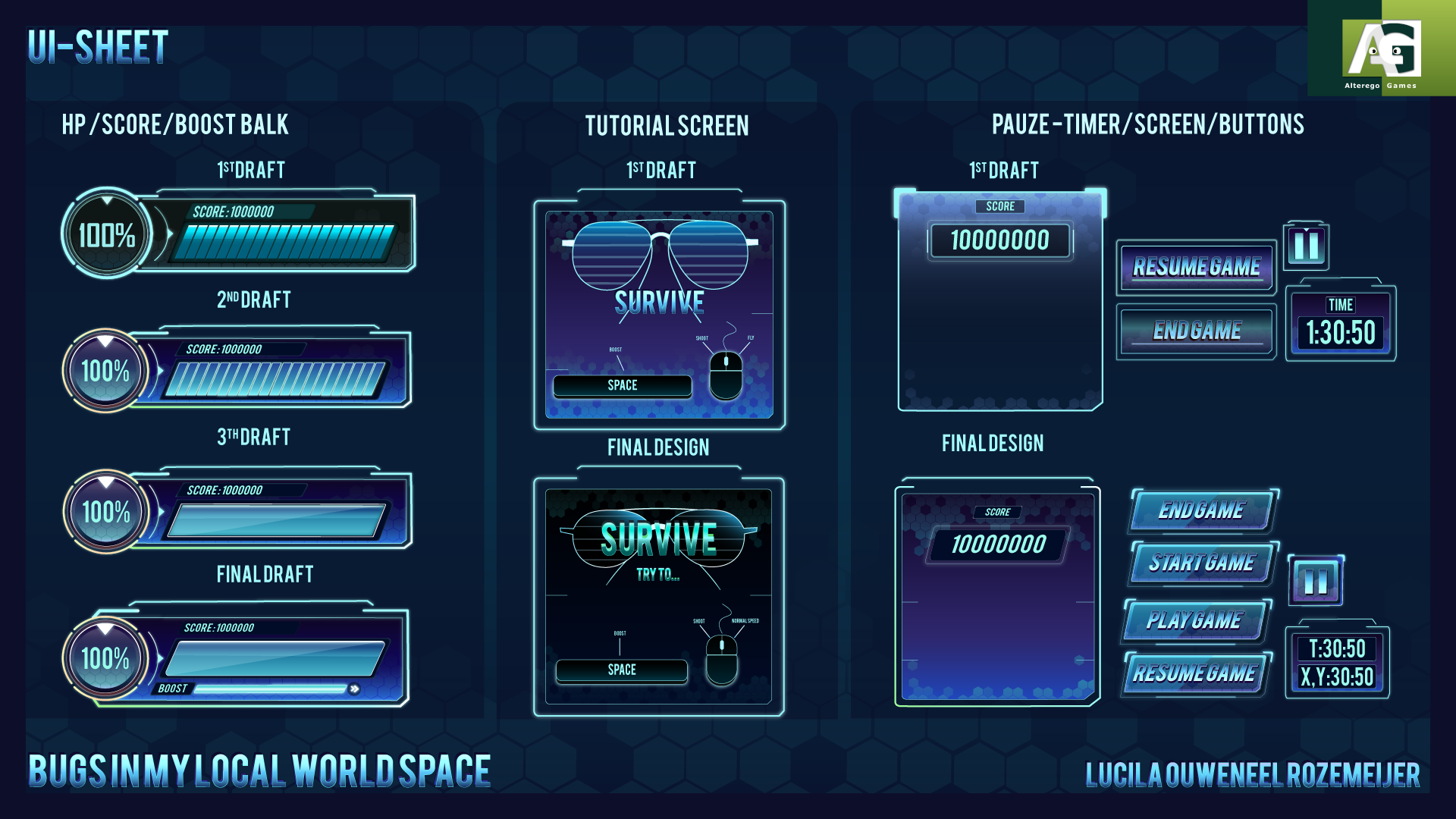 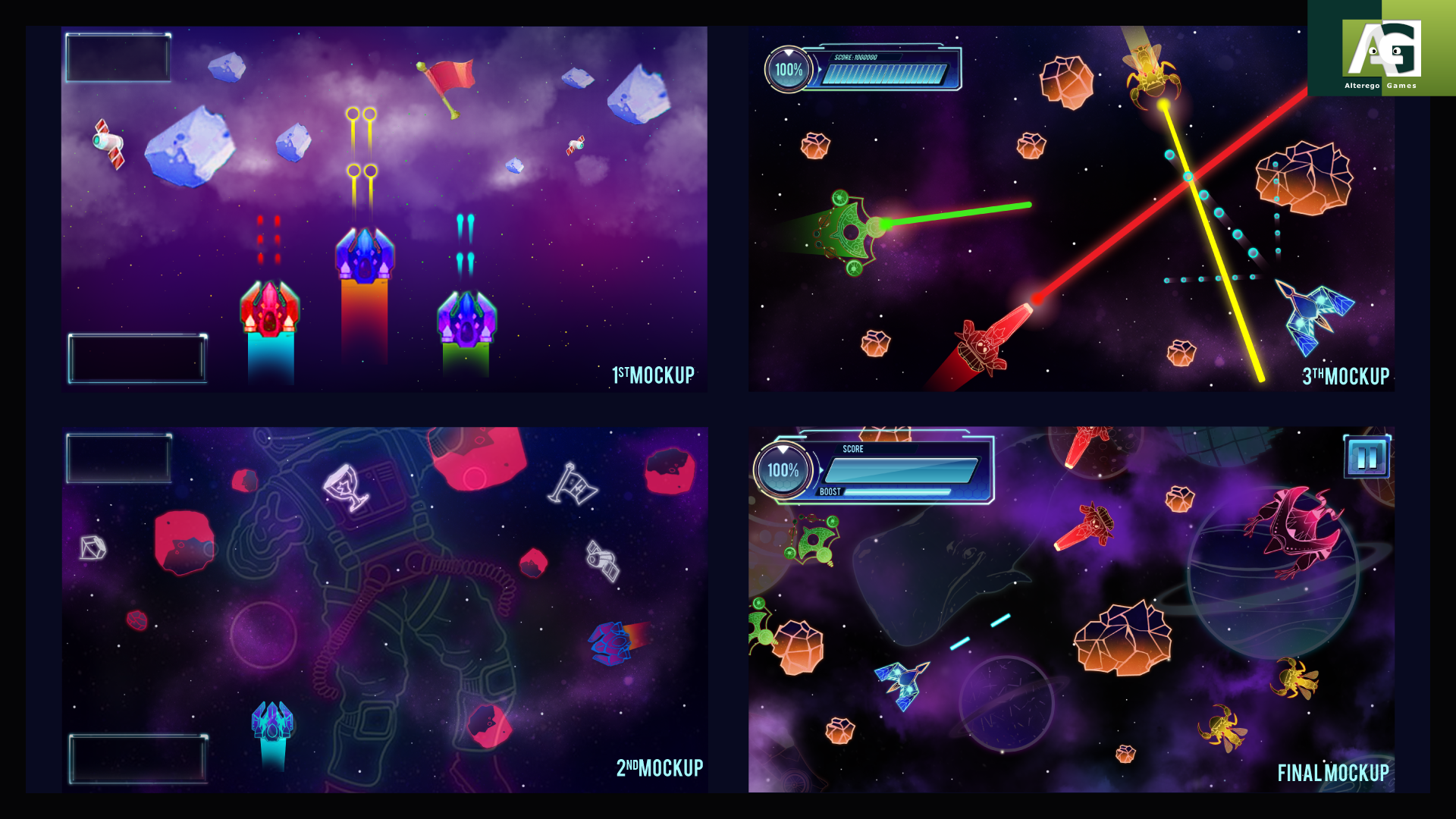 For Pip from a programming viewpoint, a few of the larger problems:
– How do you make sure the gameplay and the movement of the player is enjoyable?
– The technical aspect of making the background infinite, is space the final frontier?

Both these issues were fixed in rather peculiar fashion.
Instead of making the player faster, which resulted in issues with incoming collidable objects and the chasing enemies, the player was slowed down. Slower is less enjoyable, right? No worries, that’s where the smooth (tiling) background makes its appearance!

I spent several days and sleepless nights on how to approach this issue the best possible way. Previous experience from building a Flappy Bird game told me, making a background infinite in a certain way could cause serious unwanted problems, like the background breaking up when pausing the game, or when the game can’t keep up suddenly the player finds himself flying in empty space. Not to mention this background needed to move not only in the x axis, like in a Flappy Bird game, but also in the y axis! After a few days of working on other things in the game, by chance I decided to google the exact thing I required. This led me to a discovery that would change the background from the most time consuming problems to one solved in as little as 2 hours.

The solution was to give the texture on the background an offset and scroll through the texture endlessly. Add a few layers with a different scrolling speed…. And voila! A parallax background that requires almost-to-none CPU performance and gives the illusion that the player is moving very fast and very important: Can’t possibly break! Hurray! (Famous last words here at Alterego Games)

Thanks for reading!
Pip & Lucilla